For many years Uniface was very successful as one of the market leaders in this field and as a software vendor. However, after the year 2000, the Uniface market share has been declining steadily. 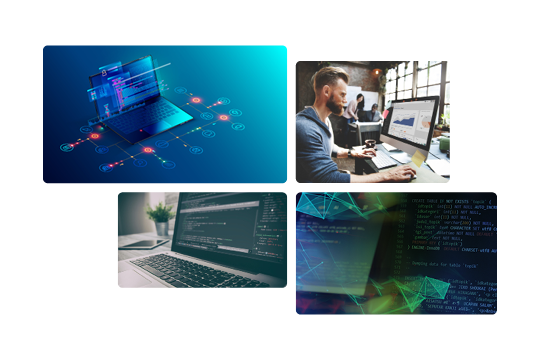 THE SHELF LIFE OF SOFTWARE

Uniface: back in time

The platform mainly enjoyed its success in the 1980s and 1990s. In 1994 the company was acquired by Compuware after which Uniface experienced its heyday and was considered the market leader in what is now called low-code from 1997 to 2000. After 2000, Uniface's market share slowly declined. This is largely due to the fact that Compuware introduced a second development tool alongside Uniface, which caused a lot of confusion among Uniface customers.

Twenty years later, in 2014 Uniface was acquired by the American investment company Marlin Equity Partners after which Uniface continued as an independent company. After a brief revival during 2014-2017, finally, in 2018 the company was heavily reorganized and ultimately sold to Boston-based Rocket Software in 2021. As a result, the independent organization Uniface ceased to exist and is now a part of Rocket Software.

The last classic version of Uniface, version 9.7, was released in 2015. This marked the end of the continued development of version 9. Although its successor, Uniface 10, was released in 2016, this version differed in architecture from its predecessor to such an extent that migration would require just as much effort as redevelopment of the software or implementing a new solution. From 2016 to the present, only one substantial new version has been released (Rocket Uniface 10.4 in 2021).

V10: upgrading is complex and expensive 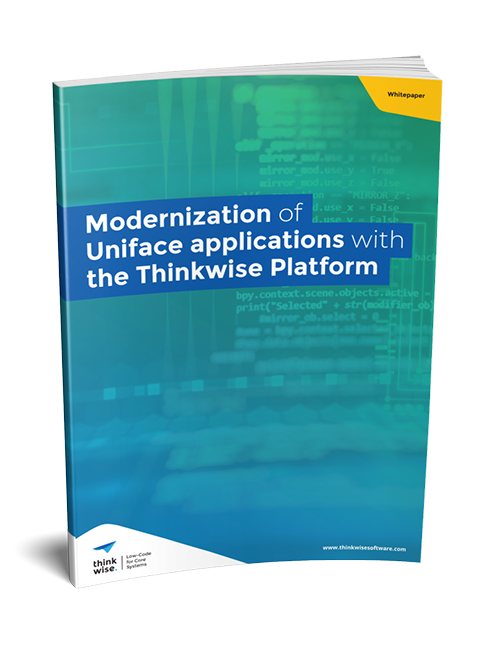 What distinguishes Thinkwise from Uniface?

We will explain what Thinkwise has to offer and what distinguishes it from Uniface below.

For all those companies that have been looking for an efficient way to modernize their outdated Uniface applications for years, there finally is an efficient and effective solution: the Thinkwise Uniface Upcycler.

Using the so-called Upcycler, you import and analyze the metadata from the existing application. The Thinkwise platform then lays the foundation for the new solution based on the meta data and automatic optimizations. This can then be fully customized. The next step is the data conversion; you will have all your existing data immediately available in the new solution. This enables you to get to the heart of your problem and convert the outdated Uniface application to a modern low-code based technology.

If you are an organization with Uniface, you face the challenge of moving to version 10 or completely modernizing, both costing the same amount of effort. But which option will prevent such problems in the future? Modernizing with the Thinkwise Platform means that your applications become independent of technology. You deploy them on a platform of your choice, for example in the cloud as a mobile app, but you can switch to what will then be the new cutting edge without any problems in the future. In fact, all you have to do is maintain a digital blueprint. As a result, applications never need to be redeveloped.

Even the early adopters of Thinkwise have never had to rebuild their application in the past 20 years, they could seamlessly transition through various technologies. For example, they went from Visual Basic in the year 2002, to C#, to ASP.NET, Java and finally to React in 2021. This is how you always stay ahead as an enterprise!

Automatically available on all devices at all times

An important advantage of Thinkwise is that all user interfaces are fully responsive. This means that any Uniface (desktop) application that is migrated to Thinkwise automatically becomes available as a web application and can be used on a tablet, smartphone or any other screen without having to make any adjustments.

There is no need to build and maintain a separate web or mobile application. Do you still want to continue working with Windows? That's no problem, because as a Progressive Web App (PWA) the Thinkwise application can also be installed locally as a Windows App.

Presenting data in a simple and accessible way

For user-friendly software, it is important that the information is presented in a clear and accessible way. Uniface applications use a lot of tabs and 'contained forms' for this, in practice this is quite difficult to modernize. Thinkwise enables you to fully customize the layout of your screens, including tabs and forms, without having to code.

Another advantage of developing software with Thinkwise is the fact that the platform has a built-in authorization system. This lets you easily create new users, including all the associated rights and roles. This is crucial for organizations with many different types of users. By integrating this authorization system you no longer need to build and maintain this essential software component yourself.

Support for multiple languages is essential, especially for applications that are used internationally. Unicode is an international standard used for encoding graphic characters and symbols in binary code, similar to the ASCII standard. Thinkwise fully supports the Unicode standard.

A migration from Uniface to many other platforms poses an additional challenge for organizations that have deployed their Uniface applications with multiple languages and want to include this language support during the migration.

Thanks in part to Unicode, the Upcycler completely solves this challenge and effortlessly migrates the multi-language capability of a Uniface application to the Thinkwise Platform. This means that non-multilingual applications also automatically become suitable for multi language use.

How does Thinkwise mitigate the risk of Vendor Lock-in?

What does the process of Upcycling a Uniface application look like exactly?

How does the maintenance of a Thinkwise application compare to Uniface?

A Thinkwise application is defined by a model that is stored in a database. The application itself is derived at runtime from that model. This means you no longer have to build separate forms, reports etc., which makes maintenance much more efficient. The complete Thinkwise metamodel including all logic is stored in a database, where it can easily be accessed and manipulated by developers.

Why wouldn't I face the same challenges with Thinkwise in 10 years?

What is the Thinkwise Guarantee?